The only thing missing was a drum roll as guests perched themselves on barstools at Cap Juluca’s oceanfront Spice Restaurant. Some were wondering about the rainbow of colorful food ingredients positioned eye level and to their left. Some were transfixed by the concoction their bartender, Francisco, mixed while he barely contained a shy smile. Others were anticipating the main event.

Seconds after a wide-eyed guest asked Francisco when the headliner would appear, Chef Juan Bochenski arrived boasting an ear-to-ear grin. Bochenski’s international chef resume reads like a Travel Channel special, and the Argentinean native was about to share many of his best-kept cooking secrets. 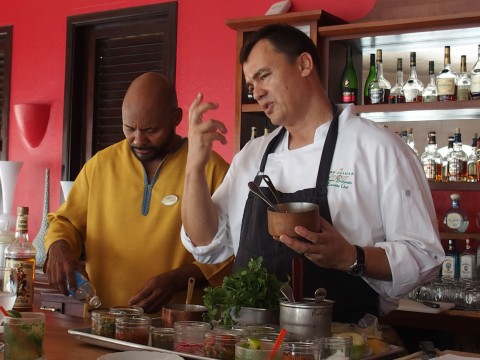 The guests were on hand for Cap Juluca’s weekly Spice It Up culinary event. The lone barrier between these vacationers and Chef Juan was a sleek hardwood bar counter. The guests were pumped to participate in Chef Juan’s intimate live performance showcasing one of Spice’s signature appetizers and seafood entrees. 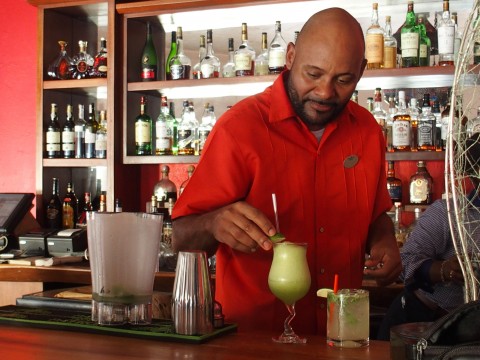 As Chef Juan warmed up the guests with hints as to the recipes, cooking methods, and flavors in which they would soon indulge,  attention shifted to the Dominican-born Francisco who was practicing his cocktail wizardry. Francisco whispered that overnight he dreamt the new drink his guests would soon be sipping.

“After sleeping on what Chef Juan would be preparing, I came up with a Jalapeno Mojito recipe,” Francisco said. Guests observed as Francisco crushed the mojito’s trademark mint and limes into a mortar, then delicately stripped the jalepeno seeds from the pepper. Francisco explained that removing the seeds is vital to eliminating the heat sensation from the zesty pepper. 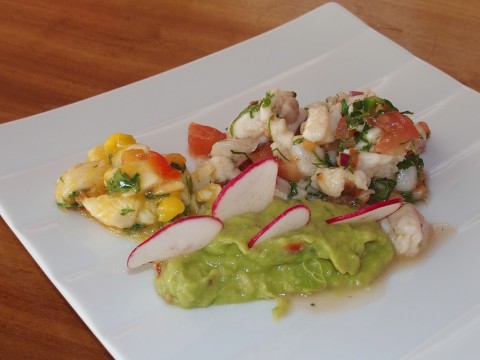 As the Cap Juluca guests nodded in unison that the spontaneous Jalapeno Mojito was indeed refreshing, everyone’s eyes veered to Chef Juan who was now in full cooking mode. Chef Juan’s prelude appetizer would be Snapper Ceviche, a treat that is a Caribbean favorite. Complementing the ceviche’s diced fish were two salsas, one mango, freshly made guacamole, and a tomato. 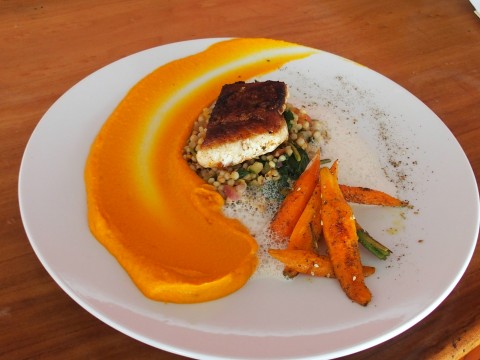 Chef Juan shared that on a remote island like Anguilla, each ingredient served at Cap Juluca’s Spice, Pimms, and Blue restaurants is treasured. Juan held up a tomato as if he were paying tribute to a five-carat diamond. “This tomato flew 1200 miles from Miami. We treat all our ingredients with precious care,” Bochenski said.

As the Cap Juluca guests devoured the ceviche while quenching their thirst with the Jalapeno Mojito, Chef Juan shifted into preparing Snapper with Chermoula Paste marinade. When surrounded by the Caribbean Sea, fresh seafood is often the lifeline for featured restaurant entrees. Chef Juan confided to his guests that snapper, specifically deep water Queen of the Ocean Snapper, is one of the best fish entrees you could ever hope to enjoy. 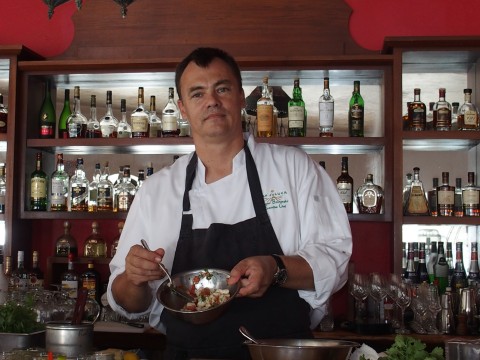 One guest inquired how Chef Juan was able to simultaneously converse while carving the thinnest of food slices with his razor sharp cooking knife. Chef Juan shrugged, smiled, and replied that this skill was something he learned after 20 years of cooking in Argentina, Australia, London, Antigua, and New Mexico.

The Spice of Life

As the Spice it Up hour flew by in the blink of an eye, Chef Juan simmered, marinated, blended, and shared his most treasured cooking secrets. The end result was an ensemble of snapper on couscous, with carrots and chermoula paste, whose presentation was suitable for framing. The only thing better than admiring Chef Juan’s culinary creation was savoring each bite served at a perfectly heated temperature.

When asked how he makes the cooking process look so easy, Chef Juan replied that “easy” is often the difference between a new chef and one who has evolved after years in the kitchen. “A young chef tries to make cooking too complicated. It’s best to keep the process simple. Less is more,” Bochenski said. 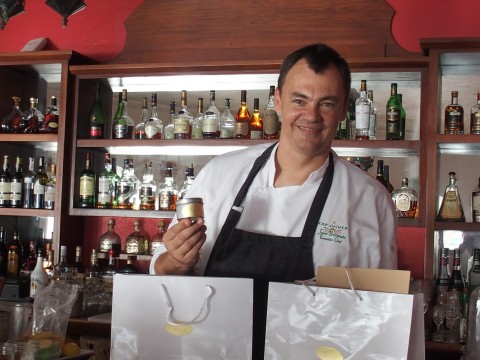 As the evening winds down, Chef Juan presents a silver canister of Cap Juluca spices to each of his special dinner partners. Guests learn that the Spice It Up experience isn’t just about good food, it’s about making memories. At Cap Juluca Resort on the island of Anguilla, dining is the spice of life. 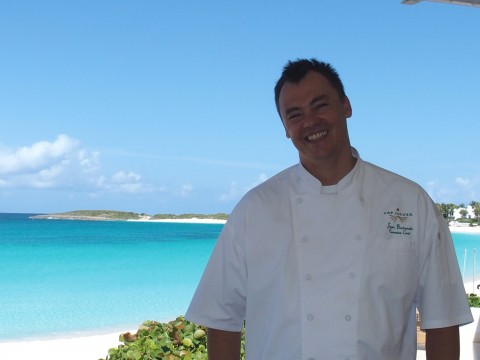