For as long as he can remember, Tony Parker burned with a passion for history and a passion for golf. Parker’s twin loves drove him to study and work in St. Andrews, the Scottish Holy Grail for someone enthralled with the complexities of the game, its most revered players, and the courses where golf originated.

Today, Parker’s life work has evolved into his dream job. As the first Historian at the World Golf Hall of Fame in St. Augustine, FL, Parker is able to give back to the game while sharing rare golf insights dating back to the 1400s.

Every year 350,000 visitors make the pilgrimage to the house built by legends like Palmer, Hogan, and Sorenstam. A Hall of Fame tour guided by Parker, a self proclaimed storyteller with a PhD in Scottish American History, peels back the layers of golf’s best players and revisits the hallowed ground where golf’s historical moments took place.

The Kid in the Golf Store

Like a kid in a candy store, Parker hit the ground running when he became the World Golf Hall of Fame’s first historian in 2014. One of Parker’s initial tasks was to create an eye opening entrance for his new workplace.

“The first thing visitors see when they arrive at the World Golf Hall of Fame is a floor-to- ceiling photo of Jack Nicklaus celebrating his 1986 Masters victory. This larger than life image immediately grabs the attention of our guests and pulls them along an area we fondly refer to as Goosebump Gallery,” Parker said. The official title for this right-turn hallway is the Gallery of Giants. The aisle features several immediately recognizable stars, as well as important players from golf’s early days.

As Parker weaves his way from exhibit to exhibit, his eyes dance and his smile rarely wavers. The variance to Parker’s buoyant demeanor occurs at those exhibits which so move Parker that his voice softens and his eyes become dead serious. 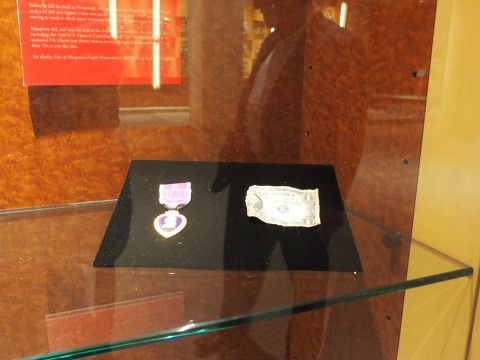 Parker believes that showing the human side of golf is as important as the prized trophies, clubs, and photographs that radiate throughout the museum. Two exhibits that cause Parker to reflect are those featuring Sam Snead and Lloyd Mangrum.

Snead’s display features his photo, his straw hat, and a metal lunch box with a primitive inscription on the side. “Snead was so poor as a child, he grabbed a nail and scratched his initials into this lunch box to deter other kids from stealing it. When Snead was asked what item he wanted to represent him in the World Golf Hall of Fame, he chose this childhood memento as a reminder of his humble beginnings,” Parker said.

One of the most poignant displays in Parker’s workplace showcases one of Lloyd Mangrum’s two Purple Heart medals for bravery in World War II. This same exhibit also holds a dollar bill ripped in half. The dollar torn down the middle is Mangrum’s half of a pact  made with his Army friend Robert Green. Prior to the two soldiers dashing into battle on the beaches of Normandy, they agreed to make the bill whole upon returning to U.S. soil. Unfortunately, Green was killed in action.

“When Mangrum returned home, he beat Byron Nelson and Vic Ghezzi in a playoff for the U.S. Open in 1946. Mangrum carried his half of the dollar during his victory and continuef to keep it close until died in 1973,” Parker said. 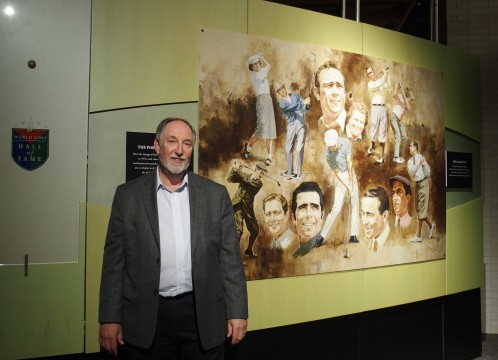 Through his dream job as Hall of Fame historian, Parker is able to connect the golf dots chronicling over 500 years and several continents. Whether he’s perched on the Hall’s replica Swilcan Bridge from the Old Course in St. Andrews or regaling how astronaut Alan Shepard launched a 900-yard six iron on the Moon, Parker embodies the rare individual lucky enough to find his life’s calling.

When he isn’t uncovering new golf research or collecting priceless artifacts, Parker makes a point of hitting the links two times per week. “Playing golf is part of my job description,” Parker said with a smile.

What do you call someone working at his dream job and playing 36 holes per week? “My business card reads World Golf Hall of Fame Historian,” Parker said. “I’m also a storyteller.”