Tales from the Cabana Bar

Jeff Rollings, the owner of the Cabana Bar at Ocean Club, flashed back to his earliest Turks and Caicos memories. “When I first visited here in 1984, you could walk Grace Bay Beach on a Wednesday and still see the footprints from Tuesday. Nobody knew much about Providenciales back then,” Rollings said.

The former Palm Springs, CA, hairdresser was fresh off a divorce when he arrived to visit an uncle selling tropical fish he caught scuba diving. “At the time, the Provo population was around 1500 people, including about 20 expats. I figured I’d start a new life here cutting hair. I packed up all my California stuff and moved to a boathouse in the Turtle Cove area of Provo,” Rollings said.

When Rollings applied for a Turks and Caicos business license, for some reason he was also approved to operate a restaurant. Rollings killed two birds with one stone when he opened an establishment called Clip and Sip. The idea was that you could enjoy a beer while getting a haircut. 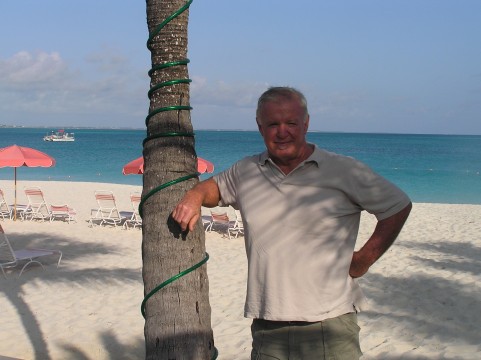 After a few months, Rollings felt Clip and Sip needed a boost. Rollings new girlfriend volunteered to make tacos, so he added this Mexican entrée along with peanut butter and jelly sandwiches to the menu. The hairdresser- turned- restauranteur also changed the name of his business to better reflect the new theme. Suddenly Jose McGillicutty’s was born.

Pizza was an immediate hit on Providenciales. Pizza became so popular that residents of the other inhabited Turks and Caicos Islands began demanding it.

“Telephones still didn’t exist on the island. We’d send pizzas over to Grand Turks by airplane. When flying from one island to another, the FAA required that the pilot identify our business three times over the airwaves. No one could pronounce McGillicutty, so they just kept saying ‘Hey Jose’,” Rollings recalled. 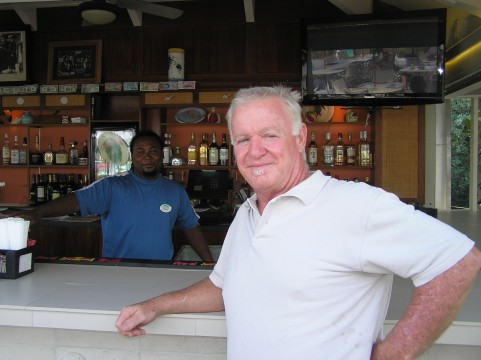 The Hey Jose name stuck and the restaurant thrived for two years on Turtle Cove. Rollings was offered a bigger spot near the center part of the island. “In the 80s, Turtle Cove was considered a proper place. All the cowboys lived in Grace Bay. We moved to the halfway point between the two. Grace Bay was still a destination waiting to happen,” Rollings said.

Rollings’ new facility was located next to a British West Indies federal building. The federal building began housing the steady trickle of British lawyers and government workers arriving from the capitol island of Grand Turk. Rollings discovered the Brits were desperate for a pub they could call their own. Hey Jose’s business took off and the restaurant began making a name for itself as a Providenciales landmark.

The restaurant became such a fixture in Provo that if a resident had a guest arrive on the island; dinner at Hey Jose’s was almost mandatory entertainment. Club Med, one of the original Grace Bay hotels, further bolstered Hey Jose’s business by shuttling guests to the restaurant daily. 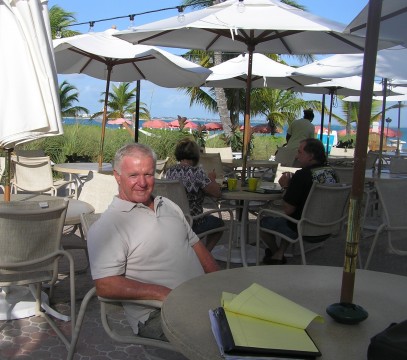 One of Hey Jose’s best customers was Dick Clark of American Bandstand fame. Clark and his wife, Kari, owned a home on Taylor Bay in Provo, and the couple would frequent Hey Jose’s on a regular basis. When Clark’s Hollywood friends visited Provo, Hey Jose’s was always on the L.A. crowd’s itinerary.

An Offer He Couldn’t Refuse

Larry Klein, a Clark associate and a producer of the American Music Awards and New Year’s Rockin’ Eve, became so enamored with Hey Jose’s that he offered to purchase the restaurant. Rollings replied that it wasn’t for sale. Klein countered that every business had a price.

Clark flew his legal team in to meet with Rollings to discuss the purchase. Clark’s lawyers asked to look over Rollings’ books. “Because all I had to show them was my checkbook and deposit book, the lawyers discouraged Klein from buying. Clark told them to come back and see Hey Jose’s when it was three-deep around the bar on a Friday night,” Rollings said.

Klein purchased Hey Jose’s and operated the business for two years before selling. “I guess he discovered that the running a restaurant on a Caribbean island isn’t as glamorous as it seems,” Rollings said.

The Ocean Club is Calling 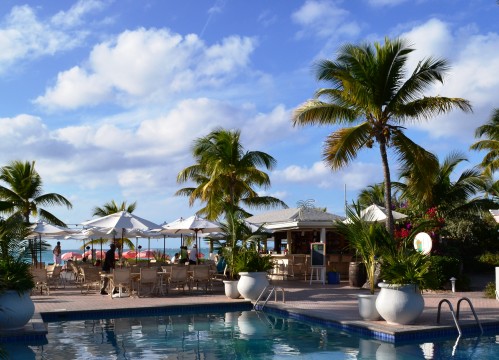 After selling Hey Jose’s, Rollings worked for years building and installing custom cabinetry for island condos and residences. Although Rollings loved working with his hands, the business was physically very demanding. Toward the end of 2010, Rollings heard that the Ocean Club was leasing their Cabana Bar restaurant. The restaurant has a prime location right on Grace Bay Beach. Although he’d owned and operated restaurants before, the Cabana Bar at the Ocean Club was an opportunity for something completely new for Rollings.

“This was the first place I’ve owned where we had a rotating clientele. Every week we have new vacationers staying at the Ocean Club. These customers are looking at the Cabana Bar through a fresh set of eyes. Not a week goes by that someone doesn’t say they want my job,” Rollings said. 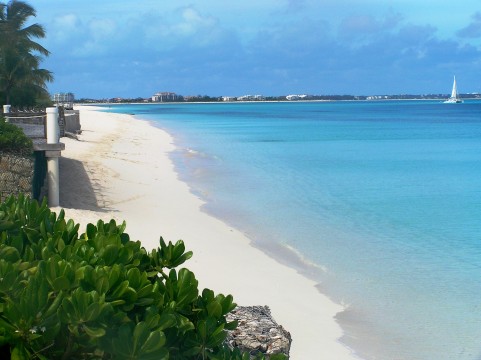 Rollings, 61, looks at the Cabana Bar as a new beginning. The outdoor restaurant is privileged to be the Provo eating establishment located closest to the ocean. Whether he’s opening for breakfast or shutting down in the evening, Rollings finds the setting rejuvenating. “To start your morning with a view like this is quite a treat,” Rollings said.

Does Rollings see himself slowing down or taking time off anytime soon? “Well, to tell you the truth, in addition to the Cabana Bar here, I just reopened Hey Jose’s,” Rollings confessed.

Hey Jose is Back

Almost 27 years since opening the first time around, Hey Jose’s is back serving pizzas in Provo. Located at Neptune Plaza about two miles from the Cabana Bar, the Hey Jose new-recipe pizzas are flying off the shelf once again.

Since reopening Hey Jose’s doors, Rollings has heard from original customers who regale in swapping stories of an era when Providenciales wasn’t the polished Caribbean gem it is today. Rollings was asked to recall one of his favorite memories from the glory days. 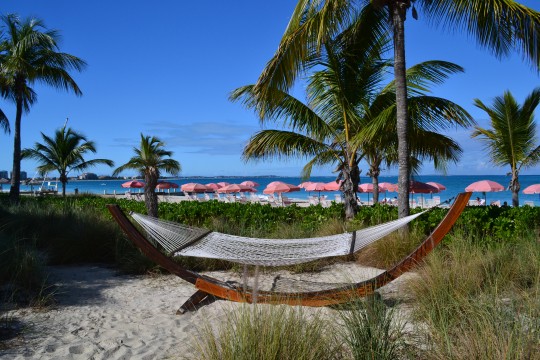 “We had a mahogany bar rail at Hey Jose’s. I would go up to Florida and have little brass plaques made. Each plaque had a customer’s name on it. This created sort of a frenzy with customers wanting to see their name along the bar. Eventually there were 80 names on the rail,” Rollings said.

When Hey Jose’s closed, I cut the rail into little slices and gave the plates to the people whose names were on the plaques. These people were the Provo pioneers. I can’t tell you how many people cried upon receiving their plaque. I guess Hey Jose’s touched their lives in a special way,” Rollings reflected.

Reward on the Beach 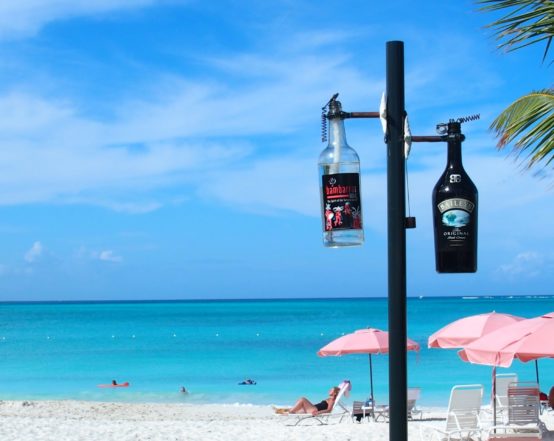 Asked what he’s learned after 27 years as an entrepreneur in Providenciales, Rollings paused and smiled. “Yesterday, while cleaning tables at the Cabana Bar, I had a customer call me over. Let’s just say that he was way better off than me. The customer motioned toward the ocean and said that he wanted my job. After all these years, I guess that’s my reward,” Rolling said.