When John Bradshaw came into this world in 1970; it was fair to call his Sedona, AZ, birthplace a one-horse town.

“My Dad couldn’t afford to pay for my delivery in cash, so he traded the doctor a thoroughbred horse,” Bradshaw said.

Two years later, Bradshaw’s brother Scott was born. “This time, my Dad paid the doctor’s bill with two horses. I tell my brother the cost increase was due to inflation. My brother says he’s worth twice as much as me.”

Today, John Bradshaw’s Sedona-based business, A Day in the West Tours, continues to carry on the family tradition of working with horses. While horseback tours of the Verde Valley have contributed to Bradshaw’s business success, it’s touring Sedona’s breathtaking red rock canyons via jeep that has really grabbed the hearts of vacationers from around the globe.

From horses to jeeps 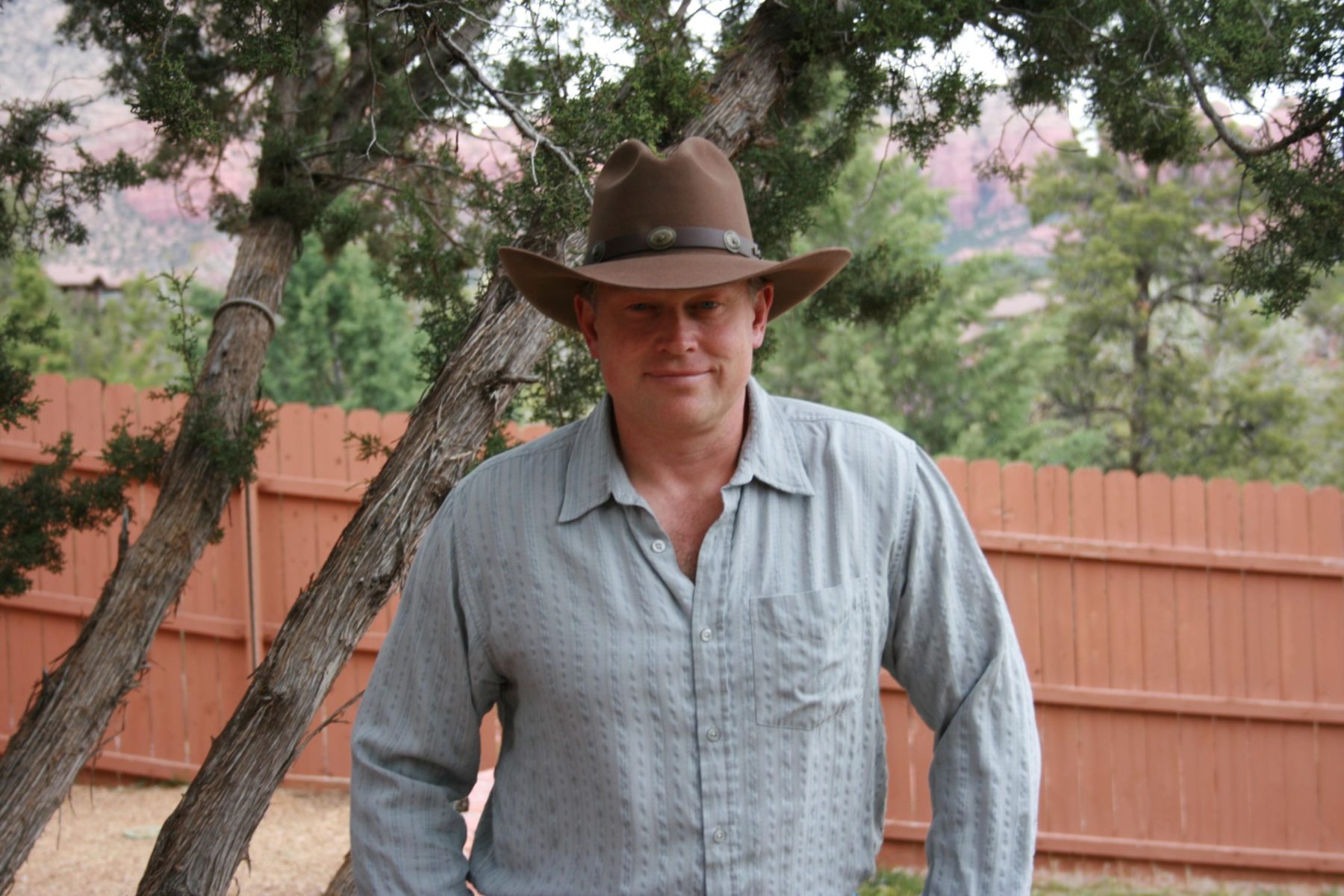 John Bradshaw – Owner of A Day in the West Tours

Bradshaw’s father, Bob, was one of Sedona’s key historical figures, and he played a major part in the town’s present day popularity and growth. The senior Bradshaw began working as a stunt man, extra, photographer, and location coordinator for almost all of the western movies that were filmed in Sedona back in the 40s and continued into the 70s. Bradshaw worked with stars such as Jimmy Stewart, John Wayne, Robert Mitchum, and even Elvis Presley. Bradshaw’s ranch served as the backdrop for dozens of these films.

When John Bradshaw began his jeep tour venture, he relayed his insider knowledge growing up in the movie business to the guides he hired for A Day in the West. His staff now shares detailed accounts of which red rock formations stole scenes in movies such as Broken Arrow, The Rounder’s, and Billy the Kid, to name a few. Tourists go home with rich tales of what they’ve seen, heard, and experienced while in Sedona. 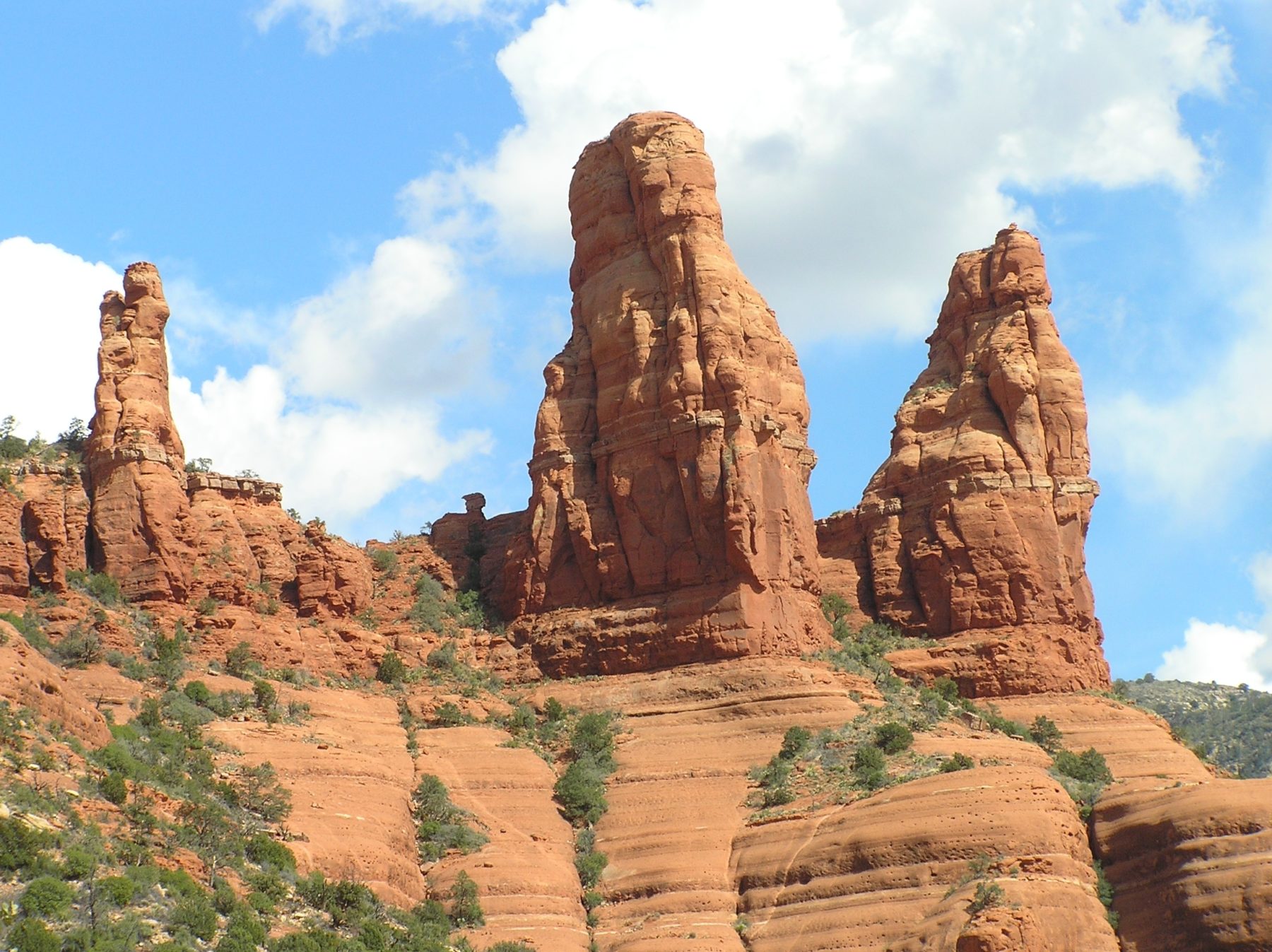 “In addition to tours that emphasize geography, Native American history, photography, and animal life, customers really get a kick out of learning about real-life locations where the western movies took place. Our customers experience these movie settings first-hand during their jeep tour of Sedona’s spectacular red rock vistas and canyons,” Bradshaw said.

When driving a car in Sedona, keeping one’s eyes on the road is easier said than done. Sky scraping red rocks pop up all around the city and are simply impossible to ignore. By comparison, a ride in a $40,000 custom-made jeep securely brings the curious to the precipice of these 3-D sandstone outcroppings. The jeep tour is a chance to see, feel, smell, and even touch something one usually only experiences in paintings. It’s an event absolutely unique to Sedona. 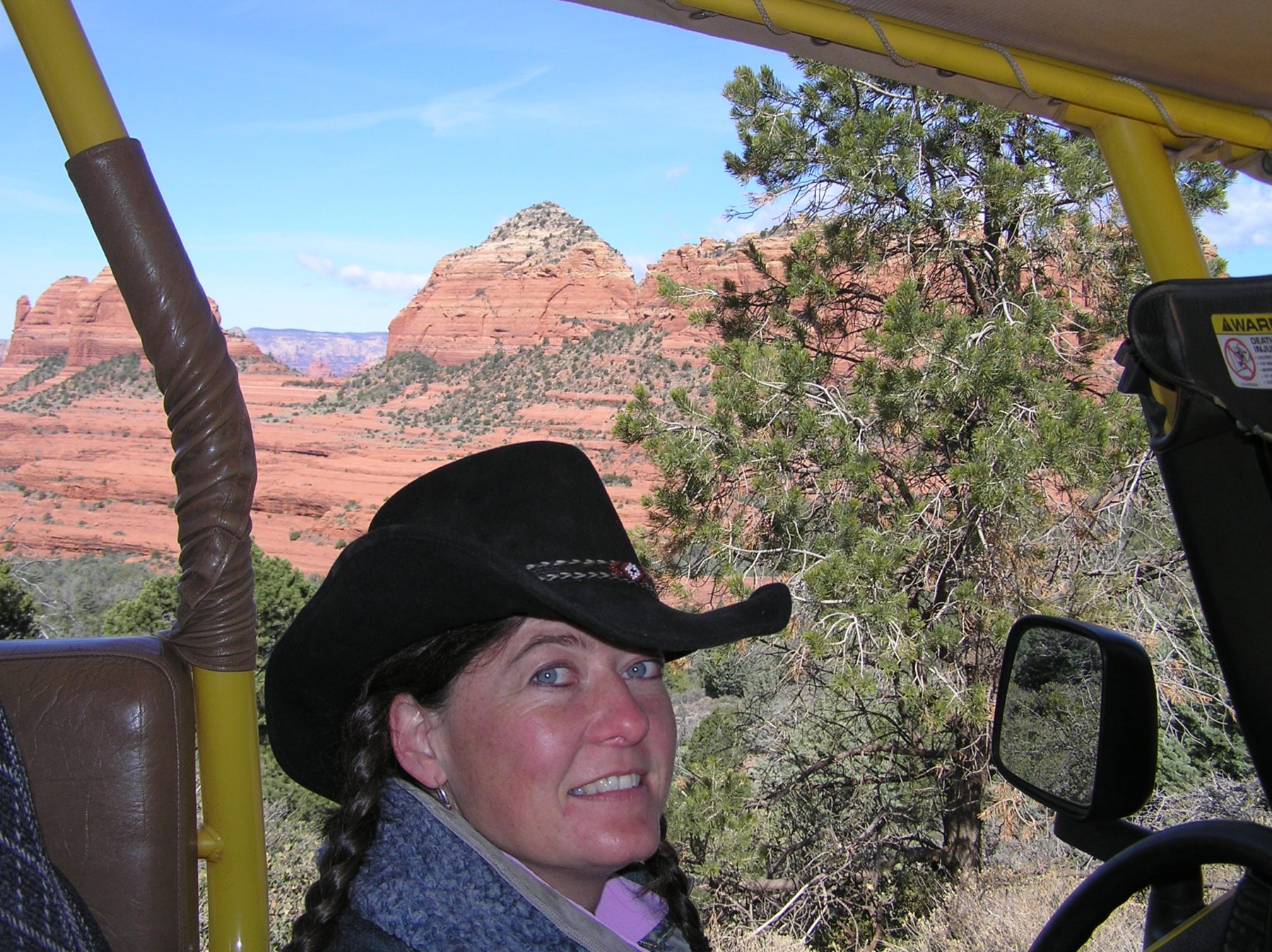 Bradshaw knows that hiring top notch guides is the key to his business success. One Day in the West guide, Nina Rehfeld, has enthralled guests with stories from the steering wheel of her yellow jeep for the past seven years. “I love the outdoors and hiking. When I discovered I actually got paid to be a guide, I said ‘where do I sign up.’”

On a recent tour along Schnebly Hill Road, Rehfeld took two Minnesota guests up the legendary 12-mile ascent built by Sedona’s founder, Carl Schnebly. Rehfeld explained that Schnebly, a Missouri native, built the road in 1902 to help bolster the trade of his apple and peach orchard business.

Schnebly’s trail is a road in its rawest form. It seems almost unimaginable that during Schnebly’s era, travelers were able to scale this vertical passage toward Flagstaff via horse and wagon. “Our jeeps really get put to the test. Every year we hear about adventuresome two-wheel-drive rental cars that end up needing an expensive tow on this road,” Rehfeld said. 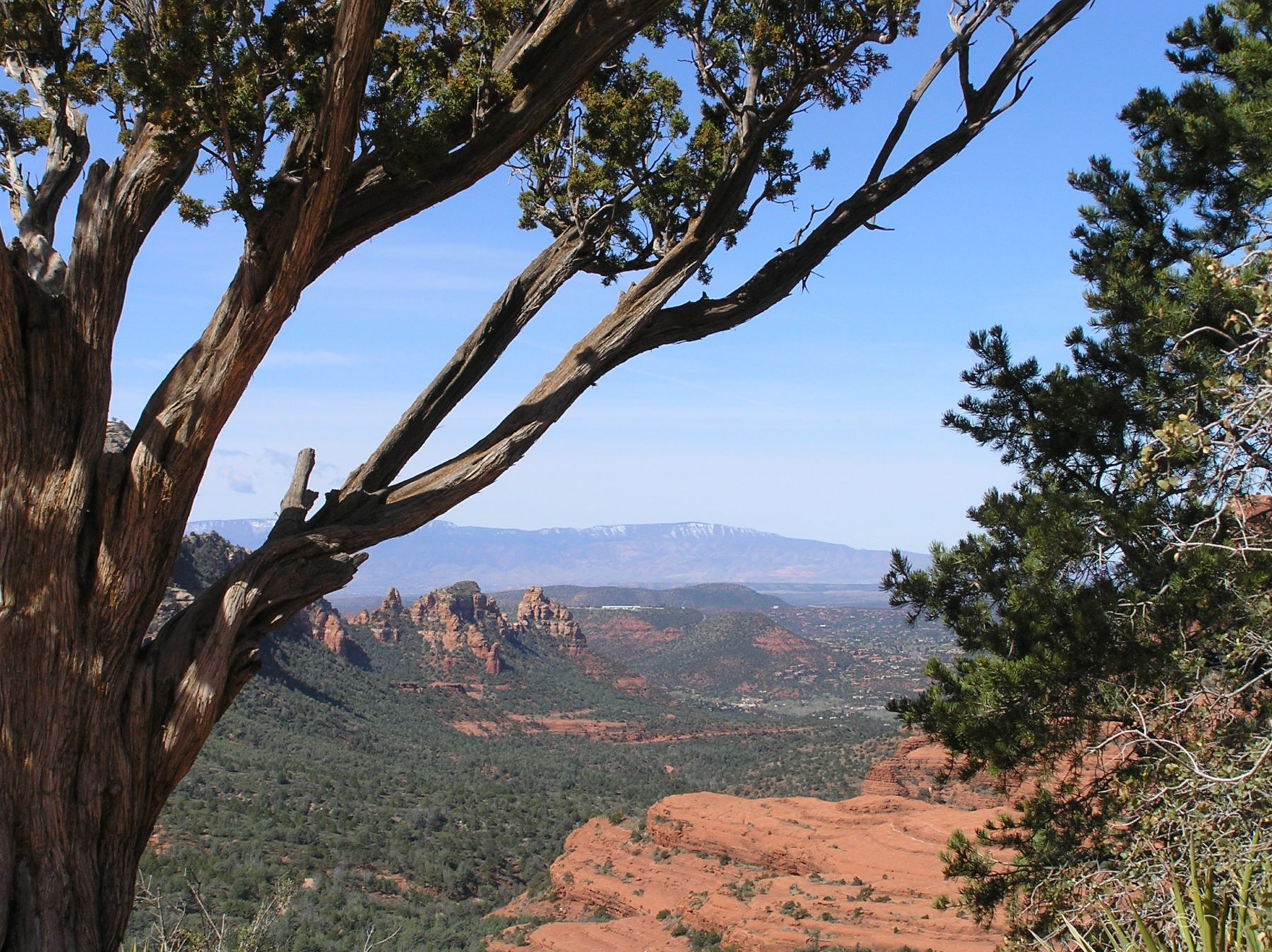 Rehfeld’s future husband was so enthralled with one of the rock formations seen on this trail that he convinced Nina that this is where they should be married. The beautiful landscape setting Nina’s husband selected has a not so beautiful name. Cow Pies Rock describes the flat and rounded sandstone mesas (the Spanish word for table) that punctuate the impressive red rock presence that juts into the sky.

The German-born Rehfeld recalled her wedding day in perfect English; “Our wedding party arrived at Cow Pies Rock at 6:00 in the morning. We wanted to say our vows surrounded by a Sedona sunrise. I walked out on Cow Pies Trail in three-inch heels. Luckily, I could hold on to my Dad’s arm. The only thing better than our wedding ceremony was the party that preceded and followed,” Rehfeld said.

Rehfeld has a left-brain, right-brain gift for telling wonderful stories while navigating her jeep along Sedona’s roller-coaster trails. Rob DeMayo, the Day in the West General Manager, explained that great care goes into hiring guides who deliver something special to their audience. “Each of our guides brings something unique to the job. Our reservations people do a great job of matching guides to the customer’s passion. We can tailor-make a tour experience for someone 365 days a year,” the New Hampshire-born DeMayo said. 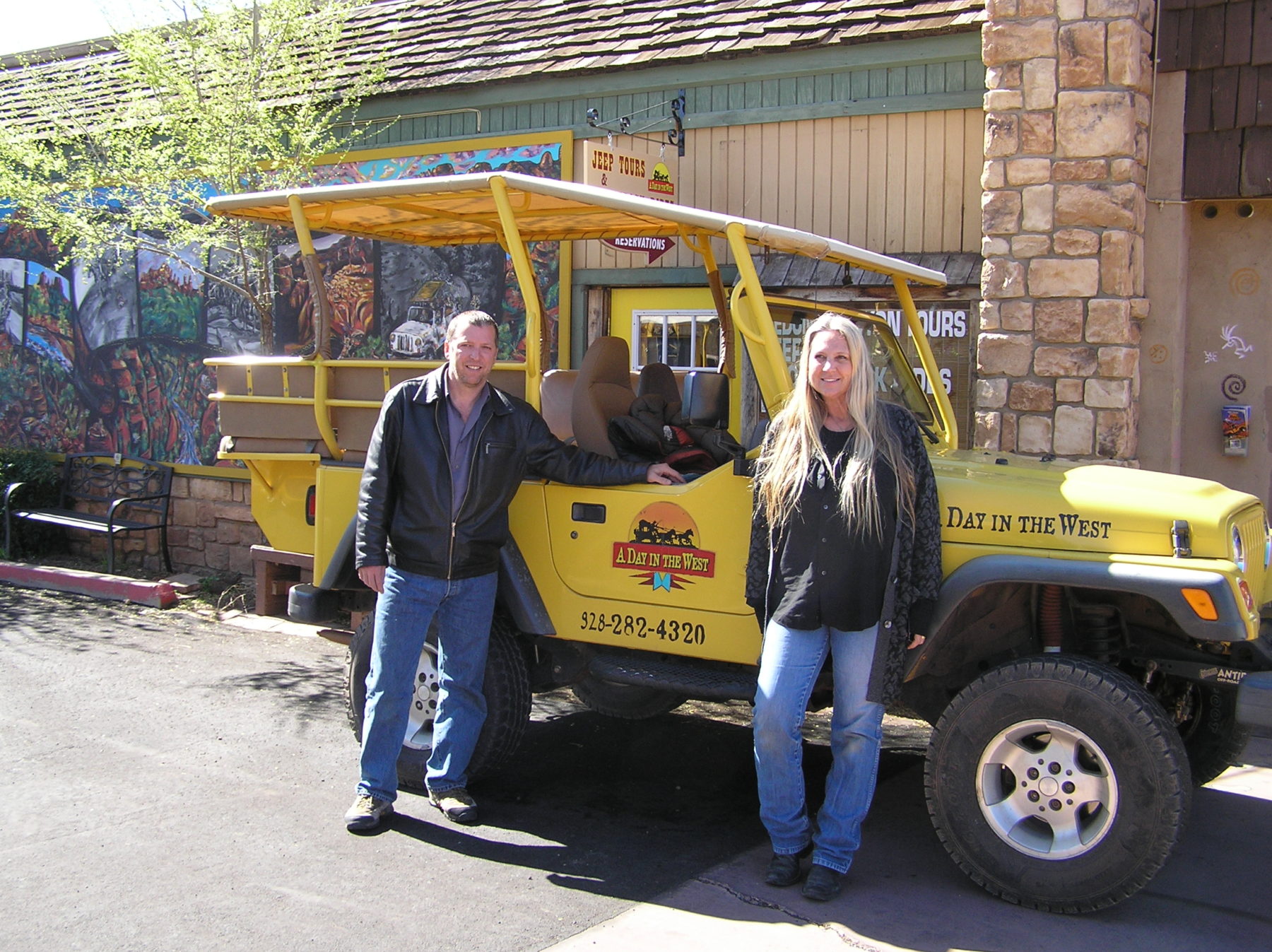 For DeMayo, his personal best experience was a day when the Arizona sun refused to shine. “A storm broke in the middle of my tour. The family I was guiding actually witnessed three lightning strikes. We took things real slow and safe. We were all wearing ponchos and the family was absolutely thrilled with their tour. That’s when the other guides started calling me Rain Man. That’s a nickname I enjoy to this day,” DeMayo said.

The passion A Day in the West tour guide has for his or her job is apparent upon your first introduction. John Bradshaw explained, “Being a guide in Sedona is a special thing. Guides usually aren’t doing this job for the money. A guide loves the outdoors, they love people, and they love telling stories.” 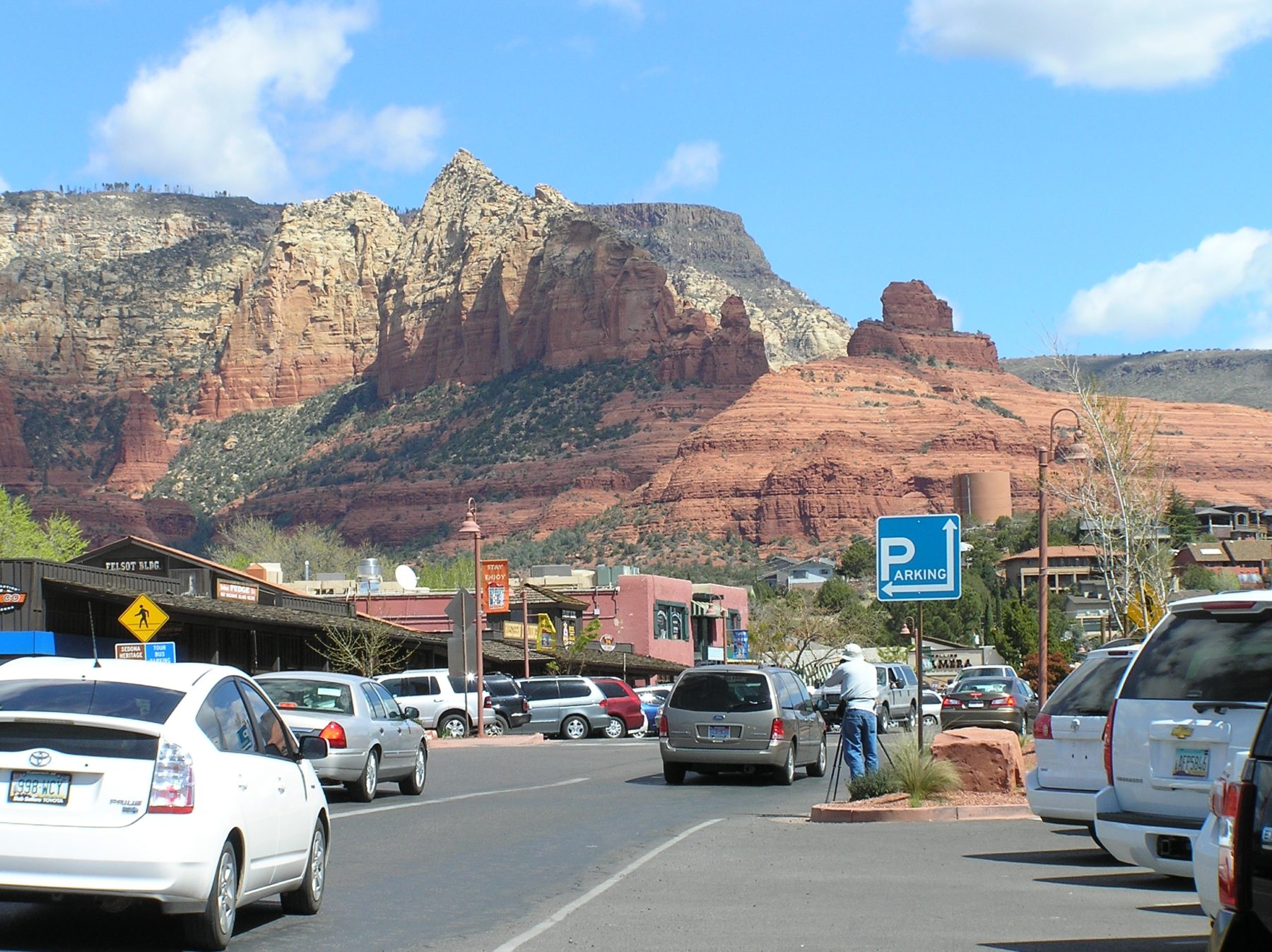 John Bradshaw is no slouch himself when it comes to story telling. The topic of his Dad’s early days on the red rock frontier spews more stories than a Sedona flash flood during the summer monsoon season.

“At the age of 17, my Dad left home in Cleveland, OH, and hopped trains cross-country. He lived the hobo life until he discovered Sedona in the early 40s. He felt Sedona was the most beautiful place he’d ever seen. He arrived here about the same time Hollywood started making westerns in the area. My Dad became quite a photographer and he has an extensive collection of personal photos featuring many of the major western movie stars. These photos cover almost four decades of film,” Bradshaw said.

John Bradshaw recalled that one of his Dad’s favorite experiences involved a photo shoot with Elvis Presley. “In 1967, my Dad worked as a photographer in Presley’s film Stay Away Joe. A good portion of the film’s footage was shot on our family’s ranch. My Dad’s fond memories of The King were due in large part to Presley being a somewhat uninhibited 32-year old. Presley had yet to feel the crush of public scrutiny. During the film’s production, Presley and his entourage literally played cowboys from dawn to dusk,” Bradshaw said.

Whether one spends a day, a week, or a lifetime in Sedona, one can’t help but be impacted by the sheer beauty of the area. If every picture tells a story, then your Sedona photos will read like a best selling novel of the old west.

A great way to write your own Sedona chapter is to view its stunning landscape by jeep. Revel in Sedona’s panoramic imagery while your guide shares stories of the Old West and today. You may even hear the true story of a father who paid for his son’s delivery with a horse.  www.adayinthewest.com

Tim Cotroneo is a freelance writer from Lino Lakes, MN, who specializes in travel, business, and golf.