Inspired by the exploits of legendary World War II fighter pilot Jose Dormoy, a young Bruno Magras dreamed of flying airplanes. In 1968, at the age of 16, Magras left his native St. Barths to seek out what he termed his “active life” on St. Thomas in the U.S. Virgin Islands. In 1973, Magras earned his pilot’s license under the tutelage of the French Civil Aviation Authority based in Guadeloupe.

Magras’ childhood dreams were fulfilled when he flew co-pilot with his hero, Dormoy. With a flying goal achieved and his future in front of him, Magras returned to St. Barths. Magras assessed that his island of 3,000 people had two voids waiting to be filled.

Magras believed St. Barths needed a reliable commuter airline to connect passengers with a neighboring cluster of Caribbean islands.  Magras also felt his island was at a turning point when it came to economic and real estate development. The timing was right for Magras to run for political office. Today Magras is General Manager of St. Barth Commuter Airline, a business he has owned and operated since 1994. In addition to running this business comprised of 35 employees and four eight-passenger airplanes, Magras was elected as St. Barths’ first President in 2007. It’s amazing how high one can soar once you make the leap to fly.

Magras’ flight plan to entrepreneurial and political heights was not without turbulence. When Magras initially partnered to start his own commuter airline, his company lost money for four years running. In fact, upon opening the doors of his fledgling airline, Magras remembers being told that his business “wouldn’t last six months.”

Magras clung to the belief there was a definite need for the service his small airline provided and he just needed to grow the reputation of his company. “In French we say, “Persevere”,” Magras said. Magras’ dedication to perseverance began to pay dividends in 1998 when the airline’s balance sheet started showing a profit. Around this time St. Barths Commuter added a third aircraft and increased its number of daily flights to the neighboring island of St. Martin. This business commitment coincided with a definite uptick in tourism for both St. Martin as well as St. Barths. The popularity of the 8-mile long St. Barths was growing, due in part to the public relations buzz garnered by the increasing number of celebrities who found the island’s privacy and chic south of France style to be the ultimate escape.

In addition to making payroll, Magras has held a laser-like focus on maintaining a spotless airline safety record. “In all the years we’ve been in business, we’ve never had an accident,” Magras said while knocking on the top of his wooden desk. This is no small feat when one considers the St. Barths runway is the second shortest in the world at 650 meters, or approximately 700 yards.

The panoramic view of the St. Barths runway is jaw-dropping, especially when a plane is landing. Due to the runway’s brevity, only airplanes with a maximum 20 passengers can land in St. Barths. When descending from a St. Martin flight, a passenger’s viewpoint includes a mountain to the left, the airport to the right, and the Caribbean Sea straight ahead. YouTube has captured a bevy of pilot newcomers whose plane tires hit the ground a bit too late. Videos show a plane skidding beyond the runway, beyond the beach, and then teetering into the sea. By comparison, St. Barths Commuter pilots touch down and settle to a restful halt in the blink of an eye. Before assuming the reigns of his safety-first business, Magras wasn’t adverse to risk-taking, especially when flying with the legendary Dormoy, a pipe-smoking pilot whose Polaroid photo graces Magras’ airport office. “I was quite good at emergency flying and doing some acrobatics,” Magras said with a smile. The baton for airborne acrobatics was passed to Magras’ son, Bertrand, who flies as a pilot for St. Barths Commuter. “Bertrand was trained at Embry Riddle in the United States. I learned not too long ago that he also tried the acrobatics. It must be in the blood,” Magras said.

St. Barths Commuter is definitely a family affair, with Bruno’s daughter Stephanie serving as the company Chief Operating Officer. When Magras was asked how many flights St. Barths Commuter averaged in a year, Stephanie had the “40,000 passengers” answer at her fingertips.

Like all business owners, Magras is alert to the hurdles his business, his location, and his industry encounters. The tourism industry is the heartbeat of the St. Barths economy.  The island’s “high season” runs from November to April. Those five months carry St. Barths Commuter’s budget for the balance of the year. “During high season we run four airplanes at up to 26 flights per day. We fly to St. Martin, Antigua, Barbados, Puerto Rico, and Guadalupe,” Magras said. The other seven months of the year, the flight levels are significantly less, typically under a dozen flights per day. 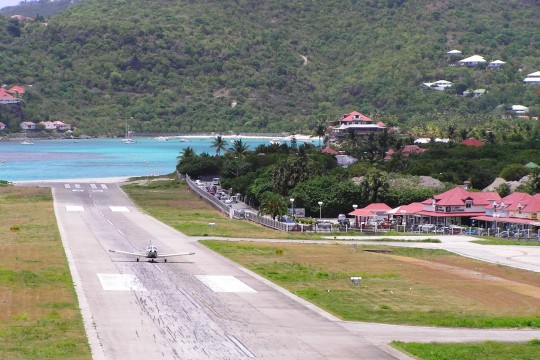 When Magras isn’t operating his airline, he dons his political cap as a second-term President of St. Barths. The island, which changed hands from France to Sweden and then back to French control, now operates autonomously under the umbrella of the French government.

Magras admitted to reluctantly running for a second Presidential term in 2012. “I’ve been involved in the government of St. Barths since running for Council in 1976. Prior to this election, I was mentally prepared to step away from politics. I ended up being re-elected with 74% of the vote,” the 61-year-old Magras said. 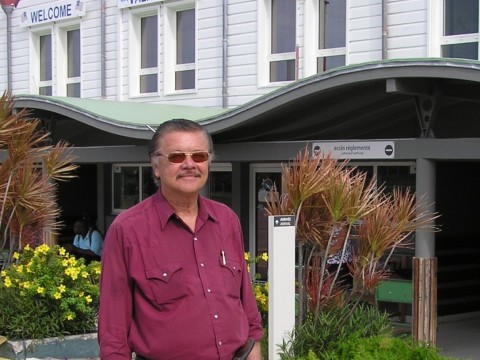 St. Barths is an island to which everything has to be imported. In Magras’ early years in politics, a decision was made to view the high-cost of living on St. Barths as an asset, rather than a hindrance. Today the island, with a current population of 9,500 residents, has no debt, no crime, and it is spotlessly clean. St. Barths is perhaps the only place in the world where there is garbage pickup running six days per week.

The idea of making the most of your situation is not lost on Magras. The entrepreneur turned policy maker reflected on how his business and political paths are not so different. “Whether it’s the airlines or politics, it’s all about keeping our passengers happy,” Magras said.