The Shell House of Isla Mujeres

Ask any Isla Mujeres taxi driver about the truth behind the island’s seashell home and you’ll notice his eyes in the rear view mirror becoming very round. The driver usually answers by telling of a mammoth conch shell washing up along the southeastern edge of the Isla Mujeres’ coastline.

If you’re interested in seeing evidence of this giant seashell, the taxi driver responds by driving south from the Isla Mujeres ferry dock. During a picturesque 15-minute drive showcasing the Caribbean Sea, the driver explains that the conch meat inside this seashell was so abundant it fed the entire island.

The driver concludes his story by sharing that the remains of the shell exist today in an upscale residential area. As he completes his sentence, the taxi begins to slow. The driver pulls over and points to a white, two-story home that is guarded by a gate and palm trees. As you step out of the taxi, you can’t help but gawk.

The Shell House- A Legend is Born 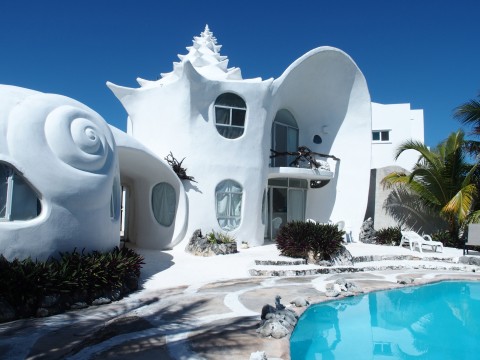 The story that there was enough conch meat to feed an entire island is more fiction than fact. The idea that a home was built in the likeness of a conch shell is amazingly true.

The vision of building a home resembling a seashell was something Architect Eduardo Ocampo had dreamed about ever since he first arrived on Isla Mujeres in 1967. Ocampo came to Isla Mujeres over 40 years ago to assist in the second phase design and construction of the Nabalam Hotel. The Isla Mujeres visual that hit Ocampo like a thunderbolt was that the island’s shoreline was absolutely thick with seashells.

Eduardo and his wife Raquel would eventually settle on Isla Mujeres. When his older brother, artist Octavio Ocampo, came to visit, he requested that Eduardo build him an art studio so he could paint during future stays. Eduardo decided his brother’s new studio and residence would be an opportunity to realize his dream of designing a house built in the image of a seashell. 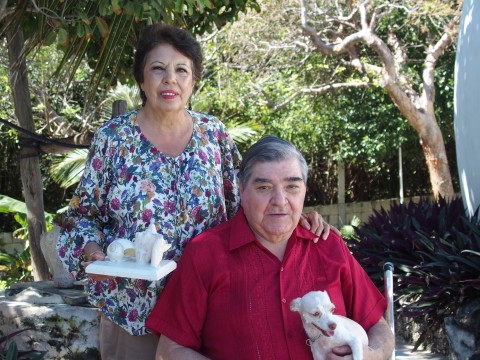 In 2001, Eduardo gathered a construction team to start building the Shell House. None of the construction workers could comprehend building a home that wasn’t square. Eduardo wanted every aspect of the home to be rounded. The exterior, the interior rooms, the windows, and the bathrooms would all be round. Eduardo was undertaking an architectural design that had never before been done.

The house was originally a single story. Eduardo wanted the main residence to also include a peak, just like a conch shell. He started constructing this aspect of the home himself. Eduardo needed to work solo on the home’s upper level because the idea of adding jagged twirling peaks on either side of the concrete rooftop was too hard for the workers to imagine, let alone construct.

Vacation in a Seashell 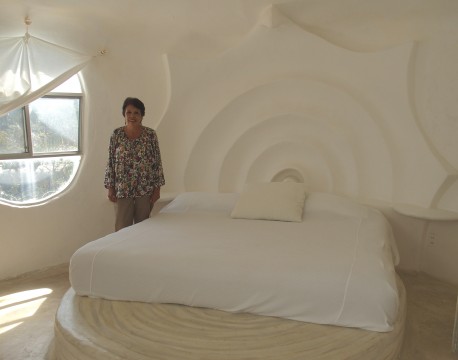 From start to finish, it took Eduardo three years to complete construction of the Shell House. The current version of the residence includes a round seating area in the sunken living room, a kitchen with a beach scene ingrained into a shelf, a spiral staircase, a massively round bedroom with a round bed and scallop shell headboard, bathrooms with water draining through seashells, and paintings of mermaids by brother Octavio on the walls.

The outside grounds feature a fabulous swimming pool, as well as a Moon Shell sister home for guests. The Shell House is a magnet for curious vacationers and honeymooners from all around the world looking to rent a once-in-a-lifetime getaway. 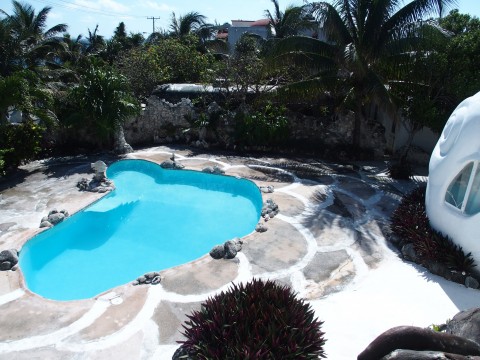 It gives Eduardo immense satisfaction to see a guest’s reaction to his architectural marvel. Eduardo Ocampo dared to think outside the box when it came to recreating his earliest Isla Mujeres memory. Eduardo explained his architectural dream come true this way, “Everything doesn’t have to be square. I wanted to do build something very unique.”

If you have the chance to visit Isla Mujeres, located just 20 minutes by sea from Cancun, don’t forget to ask your taxi driver about the home built like a seashell. Pay attention to the taxi driver’s eyes in the rear view mirror. Like Eduardo Ocampo’s vision for his brother’s art studio, your eyes can’t help but become very round when telling the story of the Yucatan’s largest seashell.