Sailing Adventure in Turks and Caicos

It’s not every day you’re given the opportunity to sail on a rum runner in the Turks and Caicos Islands. The mere thought of hopping aboard a 77-foot schooner in the heart of the Caribbean’s’ bluest waters feels like a scene right out of a Johnny Depp movie. On a brilliant Sunday afternoon in Providenciales, 12 adventurous souls did exactly that when they took off on Dave Douglas’ Atabeyra for a four-hour tour.

When Douglas moved from the Bahamas to Providenciales in 1992, he began hauling rum, beer, and who knows what else between Turks and Caicos and the Dominican Republic. After keeping a close eye on the surging Providenciales tourist trade, Douglas christened Sun Charters tours in 1998 and he began transporting wide-eyed tourists on sailing excursions full-time.

For the well-traveled Douglas, the Atabeyra is a boat and a business he and his wife Jenny literally built with their bare hands. The schooner’s two towering masts came from pine trees grown in the forest just outside the Douglas’ former New Orleans home.

Turks and Caicos – Beyond Grace Bay

Today’s version of Douglas’ sailing business is running full speed ahead. On most days during the Turks and Caicos high season of November through June, the Atabeyra sails twice per day. Douglas’ crew of Tibi Gula and Junior Relis operate half day snorkeling tours, sunset cruises, and private charters. Twice a month and three days after a full moon, Sun Charters even offer a Glow Worm excursion that features the phosphorescent mating ritual of male and female worms floating on the surface of the Caribbean Sea.

Sun Charters is a diversion for vacationers flocking to Providenciales’ Grace Bay Beach, a destination TripAdvisor ranks as the most beautiful beach in the Caribbean. When these beachcombers get restless and wish to see one of the other 37 islands making up the Turks and Caicos chain, that’s when they turn to Douglas and his crew.

What many of these remote islands lack in refinement, they make up for in sheer beauty. Enter the words “most beautiful private Caribbean island” into a search engine and this is what Atabeyra passengers see during their snorkeling tour. 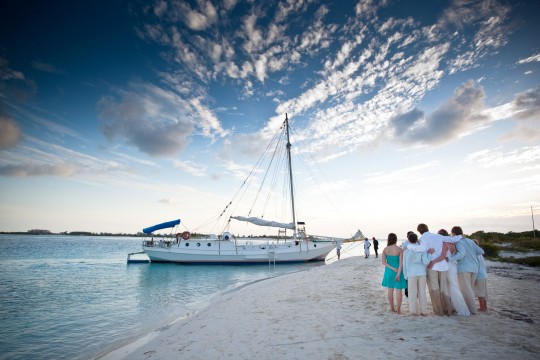 On today’s excursion, Douglas’ dynamic duo of Tibi and Junior explain to guests what to anticipate during the next four hours. Junior concluded his talk by saying, “What makes each excursion special is you should also expect the unexpected.”

Almost on cue, a passenger pointed to a dark object swimming 30-feet from the Atabeyra’s stern. Junior exclaimed, “There’s JoJo and he’s got a girlfriend.” JoJo is Turks and Caicos’ most famous mammal, a dolphin known for swimming solo and loving the company of humans. Today, JoJo greeted the Atabeyra with a companion that Junior determined was a female. Perhaps JoJo’s potential romance had something to do with the Atebeyra name which means the Goddess of Fertility.

The passengers feverishly shot photos of the congenial JoJo until he submerged after 10 minutes of frolicking with the Atabeyra. Junior felt this JoJo close encounter was reason to celebrate. He suggested that the best way to honor JoJo’s appearance was by sipping an orange rum concoction he referred to as Happy Juice. 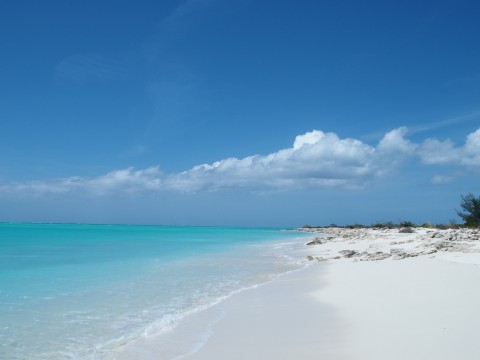 After another five minutes of sailing, Captain Tibi anchored the boat and explained the ground rules for an hour of optimum snorkeling. For those guests who chose to submerge into the sea, they’d witness a wealth of coral and fish particular to this region of the Caribbean.

When the snorkelers hoisted themselves back on deck, Tibi explained that the Atebeyra’s next stop would be Pine Cay, an island hosting a single hotel. Pine Cay, located about 30-minutes by boat from Providenciales, is home to The Meridian, a private club consisting of 38 private homes and a 13-room beach club.

Legend has it that in 1492, Pine Cay was Columbus’ first stop in the New World. One can only wonder why, when Columbus witnessed Pine Cay’s powder white beaches and calm turquoise waters, he just didn’t raise his flag and stay forever.

Atabeyra’s passengers luxuriated for an hour in Pine Cay’s shallow waters. This serene stop could only be described as paradise at its finest.

What Would Johnny Depp Do? 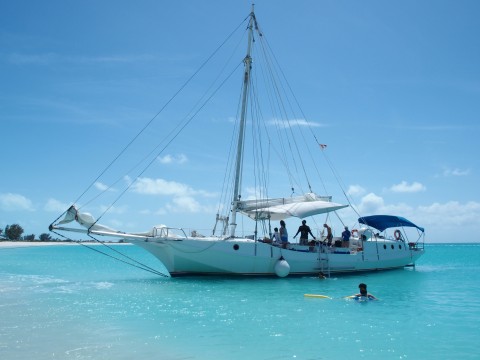 On the way back to the Atabeyra home port at The Blue Haven Resort and Marina, it was time for the passengers to reflect. You didn’t need Happy Juice to keep from smiling after a relaxing day sailing, a JoJo sighting, and a wonderful escape to the shores of Pine Cay.

Around 4:00 in the afternoon, the Atabeyra docked, and passengers who began the day as strangers ended their journey as friends. As the last guest stepped upon the Blue Haven dock, the 70s disco song “Good Times” played softly from the Atabeyra P.A. system.

If you’re ever asked to sail on a rum runner in the Turks and Caicos Islands, you’ll be missing a “good time” if you say anything but “yes.” How many opportunities do you get to star in a scene that usually headlines Johnny Depp?